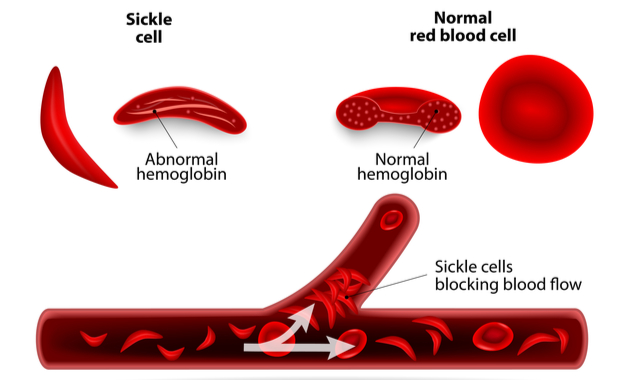 June 19th is observed as World Sickle Cell Anemia Day every year with the aim to spread awareness about the condition.

“If I clearly remember my childhood, I could only think of those frequent visits to hospitals. I was not like the other school-going kids who used to participate in every sport because my body would give in. I would collapse due to overexertion and spend days in pain, all because of my health condition. Most of my friends knew about my condition and even my school staff were informed so that in case of an emergency, I could be rushed to a hospital.

It was not easy to go on blood transfusion, visit hospitals on a regular basis, pop painkillers (which often failed to provide any respite) and get screened quite often than not about any health complications. But suffering from sickle cell anemia never held me back to achieve what I wanted to in my life,” says Milan, a college graduate.

Sickle cell anemia is an inherited form of anemia which is caused due to a single gene mutation. It causes mutation in the sixth position of the beta-globin chain of hemoglobin. Hemoglobin consists of four protein subunits, two called alpha-globin and two called beta-globin. Mutations in both the chains of the beta-globin can cause sickle cell anemia. However, if there is a mutation in only one single chain of beta globin, then it is known as sickle cell trait.

It is an autosomal recessive condition which means that the condition can be passed from parents to kids only if both parents pass on the mutated gene to the kid. So people who have two copies of the mutated hemoglobin beta chain are known to suffer from sickle cell anemia. But if you have sickle cell trait, then you may have one normal hemoglobin gene and one mutated gene. This means that you produce both normal hemoglobin and sickle cell hemoglobin. Although your blood might contain some sickle blood cells, the symptoms might not be seen or very minimal. But you are a carrier of the condition, which means that you can pass the gene to your kid.

People with normal hemoglobin chains contain red blood cells which are shaped like discs. These cells easily pass through the blood vessels, including the smallest ones and reach different parts of the body. However, people with sickle cell anemia contain mutated genes and as a result, the red blood cells are abnormal in shape, meaning these cells appear as crescent shape or in the form of a sickle. Due to the deformed shape, the red blood cells become sticky and rigid, which increases the chances of forming clumps and sticking to blood vessels. This blocks the blood flow which can lead to pain and tissue damage.

People with SCA may show the same symptoms but the severity of the symptoms might vary from person to person.  Here are the common signs and symptoms of SCA

–Excessive fatigue and irritability due to low levels of iron in the body caused by the defective hemoglobin chain.

–Fussiness in kids due to fever and irritability which is caused due to the sickling of the healthy blood cells.

–Delayed growth in kids due to lack of proper oxygen supply and nutrients to the growing baby due to the shortage of healthy blood cells.

–Jaundice (yellowing of the skin and eyes) can result if the cells damage the liver which is responsible for clearing toxins from the body.

–Pain and swelling in the hands and feet which is caused due to blocking of the blood flow to the limbs.

–Frequent infections are also seen because sickle cells can damage the spleen (an organ which fights infection and scavenges dead cells), thereby increasing your risk of infections.

–Pain in the chest and back can occur if the sickle-shaped red blood cells block the blood flow through the tiny blood vessels to the chest, back, abdomen and joints. Periodic episodes of pain, which are known as pain crises, is one of the key symptoms of SCA.

Although sickle cell anemia is usually diagnosed in infancy, if you develop symptoms such as unexplained pain, swelling in the limbs or abdomen, fever or signs and symptoms of stroke, do rush to your doctor.

The diagnosis of SCA is usually based on the appearance of pain in hands and feet which is followed by detailed physical and clinical examination. Hemoglobin electrophoresis is the test used to confirm the diagnosis of SCA and also know about the type of SCA. Sickle cell disease continues to be a serious, widespread disorder with only a few effective treatments.

The treatment is usually based on the symptoms and involves the use of painkillers, rehydration, treating any underlying infections, and blood transfusion. Also, vaccination is highly recommended in these individuals to lower the risk of infections. If you have a doubt about being a sickle cell carrier, then fix an appointment with a genetic counselor so as to understand in depth about the possible treatment and reproductive options.

(The article is reviewed by Dr. Lalit Kanodia, General Physician)e