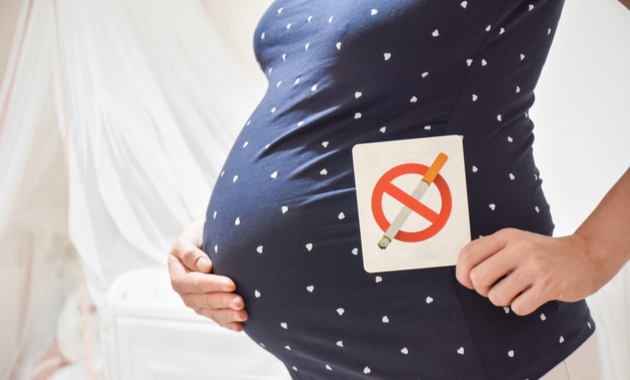 Smoking cigarettes throughout pregnancy is a big risk factor for various health problems. Numerous studies have proven the long-term and short-term negative effects of smoking on mother and the unborn child.

Here is how active and passive smoking can impact mother and baby.

Maternal smoking during pregnancy is associated with various health complications in the mother as well as the offspring. These include:

Preterm delivery:  The risk of preterm labour (<37 weeks) is about one and half times more in women who smoke during pregnancy as compared to non-smokers.

Moreover, there is a strong association between maternal smoking and “very preterm” infants (<32 weeks gestational age).

Low birth weight babies: Mothers who smoke during pregnancy are likely to have low birth weight infants, who weigh an average of 150 to 250 g less than infants born to non-smoking mothers.

Growth restriction: Intrauterine growth retardation (IUGR) of the unborn child is one of the worst complications induced by smoking. A Brazilian study done on newborns exposed to tobacco smoke throughout pregnancy showed an average decrease of 223.4 g in birth weight, 0.94 cm in birth length and 0.69 cm in head circumference.

Stillbirth (death or loss of a baby before or during delivery): For smokers, the rate of stillbirth is increased by 23%. According to the Centers for Disease Control and Prevention (CDC) babies whose mothers smoked during pregnancy and those who were exposed to smoke after birth are more likely to die of Sudden Infant Death Syndrome (SIDS).

Long-term behavioral and psychiatric disorders: The risk of congenital abnormality in babies born to smoking mothers is estimated to be 2.3 times more than that of non-smokers.

Birth-defects: Babies born to women who smoke are more likely to have certain birth defects like congenital heart defects, cleft lip or cleft palate. Nicotine in pregnancy damages the DNA of the fetus causing genetic abnormalities. The overall risk of giving birth to a child with a congenital malformation increases by 13% for smokers.

Pulmonary diseases: A study showed that smoking cigarettes during the first trimester of pregnancy increases the risk of wheezing and asthma in the child.

Exposure to secondhand smoke causes 600000 premature deaths per year. The toxins in secondhand smoke can directly affect the growth and development of the fetus. Nicotine in tobacco smoke acts as a vasoactive (causing narrowing of blood vessels), which reduces the blood supply to the fetus.

Also, the presence of carbon monoxide depletes the oxygen supply to the fetus and increases the risk of fetal death. Here are top 20 smoking myths busted!

Here is how secondhand smoke, also known as passive smoking, can impact the health of the fetus even after birth:

– The mean birth weight of babies born to mothers exposed to secondhand smoke was 118 grams lesser than that of babies who were not exposed, reported a study published in International Journal Of High Risk Behaviours and Addiction.

– Among the Indian population, the incidence of low birth weight was 31.9% among the women exposed to secondhand smoke and 17.2% among the non-exposed women, which is higher than those reported in other countries.

– There is an increased likelihood of nicotine addiction at a later age as a result of prenatal tobacco exposure.

– The risk of tobacco use in adolescence is higher among kids exposed to secondhand smoke in pregnant women due to prenatal tobacco exposure.

– The risk of spontaneous abortion and preterm delivery is not limited to smokers alone, passive smoking can also adversely impact the pregnancy.

– Passive as well as active smoking can moderately impair the reproductive health of boys and girls exposed to cigarette smoking.

Unlike other factors that increase your risk for various diseases, smoking is among the ones that are completely avoidable. So if you are planning to quit smoking, then check out our range of smoking cessation products that can help you quit.

Also, read about medical tests that are a must during pregnancy.

Zacharasiewicz A. Maternal smoking in pregnancy and its influence on childhood
asthma. ERJ Open Res. 2016 Jul 29;2(3).