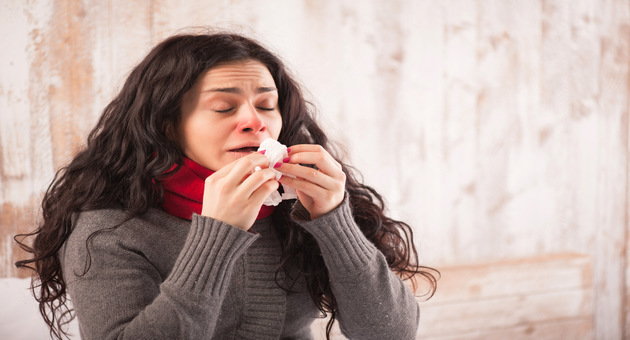 Chilly winters brings along, not only chapped lips, dry hands but the most troublesome cold and stuffy nose. Sinusitis, inflammation of the sinuses, can last on for close to 12 weeks or even longer. It may include running nose, coughs, headache followed by fever many a times. There are these effective ways that can help you fight cold better before you fall prey to the severe medications.

Here are 6 effective ways to fight the viral cold better:

-Contagious in nature, cold viruses most commonly spread via droplets. They are viable for close to three hours on the surface of the skin and usually spread by contact.

-Make sure you wash your hands more often to get rid of these viruses. Dry your wet hands with a clean and dry towel.

-Viruses are prone to cling onto wet surfaces more than dry surfaces. Make sure you replace your used towels more frequently than usual.

-Studies suggest that people who are at an increased risk of cold, such as children and elderly, should increase the intake of Vitamin C.

-It has been found to significantly reduce the duration of the cold and speedens the recovery process.

-Include citrus fruits and veggies such as oranges, guava, kiwi, avocado, lemons, broccoli, peas, tomatoes to your daily diet.

-The better you feed yourself, the sooner you will recover is the tried and tested remedy for cold.

-Include warming spices such as ginger, garlic, cinnamon, cloves in your food preparations. Ginger, which has antiviral properties, consumed along with honey has been found to benefit many with viral cold.

-Include boiled veggies, soups and nuts in your diet. Consume food that is easy to digest, high on nutrients and fibre.

-It sounds difficult to practice, but make sure you keep yourself hydrated by drinking enough of fluids throughout the day.

-Drink lots of fluids such as such as water, soups, lemonade and herbal teas. Fluids aid the loosening and thinning of the mucus, therefore making it easier to expel.

–Peppermint, chamomile, ginger tea can be the preferred options. It is best to avoid coffee and caffeinated beverages as they would further dehydrate the body.

-Studies suggest that probiotics can further enhance the immune defence activity such as the activity of natural killer cells, macrophages and antibody production.

-Include probiotics such as yoghurt (at normal temperature), sauerkraut (fermented cabbage), microalgae such as spirulina, chlorella and yakult.

-Tulsi, an immunity booster, helps to strengthen the body’s defense system and helps to keep the respiratory infections away.

–Tulsi along with black pepper has been found to benefit many suffering from running cold and cough.

-It reduces inflammation, helps to expectorate the mucus and provides relief from the cold.

So, go ahead and fight the viral cold better with these effective and easy natural remedies. Stay Healthy, Stay Happy!

One thought on “Fight The Cold Better This Winter With These Natural Remedies!”