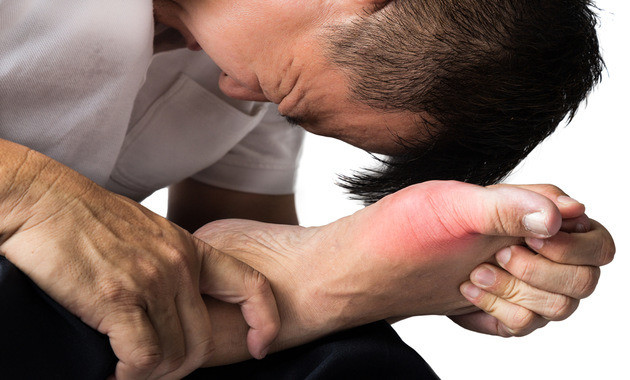 Commonly reported in men, gout has been found be prone in people who are overweight, drink excess of alcohol, overeat foods rich in purines (such as fish and meat).

-Sudden pain in the big toe.

Foot, ankle, knees and joints are the commonly affected areas in gout. The attack may last for a few days to weeks and may or may not come back after months.

-The doctor shall first perform a physical examination wherein he shall ask you relevant signs. He may perform a blood test to check for the increased levels of uric acid in the blood.

-In severe cases, sample of fluid from your joints is taken to check for the formation of uric acid crystals.

–X-ray examination of the extremities (feet and hands) is usually performed to study the affected areas in the later stages.

If you are diagnosed with gout, make sure you take the following things in consideration to minimize further attacks:

–Control your weight. Obesity and overweight increases your risk for gout. Avoid very low calorie diets as they are high in uric acid and therefore may act as a trigger.

–Exercise Regularly. Include moderate 30 minutes workout in your daily routine.

–Limit your alcohol intake. Alcohol reduces the release of uric acid, however, this increases the accumulation of the acid in the body.

–Limit intake of purine rich foods such as meat and seafood.

3 Common Myths On Hookah Smoking Busted!
How Would You Know If It Is A Migraine Or A Headac...
Effects Of Secondhand Smoke On Non-Smokers
9 Everyday Habits To Keep Your Kidneys Healthy
Top 7 Home Remedies For Dehydration
7 Complications Of Hypothyroidism
Bone, Joint & Muscle Care, PAIN ANALGESICS