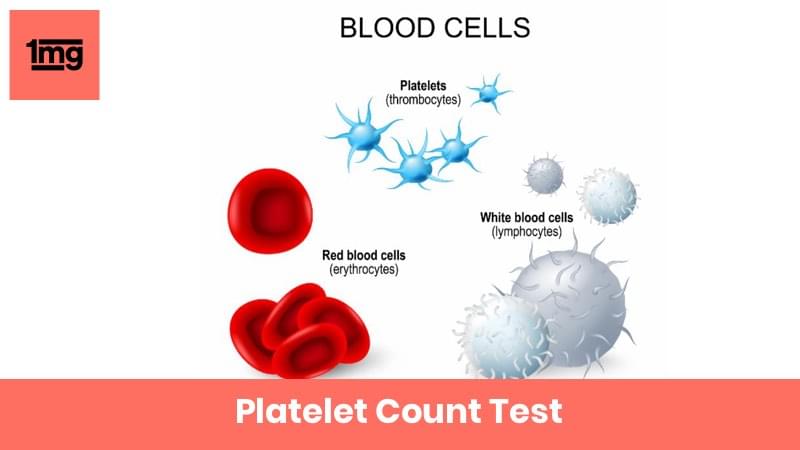 Platelet count (PC) is also known as Thrombocyte count, Platelet count test (PLT), Platelet distribution width (PDW),  and Mean platelet volume (MPV). This test determines the number of platelets in the blood. The platelets are also known as thrombocytes which are tiny fragments of cells. They play an important role in the process of normal blood clotting.

Why is PC done?

The platelet count is done:

What does PC Measure?

The platelet count measures the number of platelets present in the blood. Platelets are also known as thrombocytes which are tiny fragments of cells. These are formed from large cells which are found in the bone marrow known as megakaryocytes. After the platelets are formed, they are released into the blood circulation.

Whenever there is an injury to a tissue or blood vessel, bleeding starts. At this point, platelets help in stopping the bleeding in three ways:

With these steps, a loose platelet connection forms at the site of injury. This process is known as primary hemostasis. The activated platelets start to support the coagulation cascade which involves a series of steps that includes the sequential activation of clotting factors. This process is known as secondary hemostasis which results in the formation of fibrin strands that knit through the loose platelet connection to form a fibrin net. After that, the connection is compressed to form a stable clot so that it remains in place until the injury heals. Once the injury is healed, other factors come into play and break it down so that it gets removed.

In case the platelets are not sufficient in number or are not functioning properly, a stable clot might not form. These unstable clots can result in an increased risk of excessive bleeding.

Q. Is there any preparation required before the test?
Inform the doctor about the medications you may be taking. No other specific preparations are usually required before this test.
Q. How is the blood sample taken?
The healthcare provider takes a blood sample from the arm. The site from where the blood is to be withdrawn is cleaned with a swab of rubbing alcohol. This is then followed by inserting a small needle which has a tube attached to it for collecting blood. Once the sufficient blood for analysis is withdrawn, the needle is removed. The site is then covered with a gauze pad.
Q. Is there any risk associated with the withdrawal of blood sample procedure?
As such there is no risk but in few cases, bruising, bleeding, and infection at the puncture site can be seen. In very few cases, there can be swelling of the vein after the blood is withdrawn.
Q. If my platelet count is abnormal, what follow up tests might my doctor order?
The tests which can be ordered depends upon the cause and the results of CBC and peripheral smear. They may include: (1) Tests for infectious diseases like dengue (2) Tests for bleeding disorders like PT, PTT (3) Iron studies (4) Tests for liver diseases 5.In rare cases, bone marrow biopsy should be ordered.
Q. What are the signs and symptoms associated with low platelet count ?
The signs and symptoms associated with low platelet count includes easy or unexplained bruising, prolonged bleeding from a small wound, numerous nosebleeds, gastrointestinal bleeding, heavy menstrual bleeding. These low platelet count can also result in petechiae (small red spots on the skin) and purpura (small purplish spots on the skin) which are caused by bleeding under the skin.
Q. In which conditions low platelet count can be seen?
Low platelet count is known as thrombocytopenia. These reduced platelet can be seen in conditions like idiopathic thrombocytopenia, viral infections (e.g., mononucleosis, hepatitis, measles or HIV), and certain medicines (e.g., ibuprofen and aspirin). Other conditions which can cause a decrease in platelet count include heparin-induced thrombocytopenia, leukemia, lymphoma, aplastic anemia, chronic bleeding from stomach ulcers, sepsis, and cirrhosis, Along with that, autoimmune disorders such as lupus, chemotherapy or radiation therapy, disseminated intravascular coagulation, thrombocytopenic purpura, hemolytic uremic syndrome, and exposure to toxic chemicals (e.g., pesticides, arsenic or benzene) can also result in low platelet count.
Q. In which conditions high platelet count can be seen?
A high platelet count can be seen in some cancers like lung cancer, gastrointestinal cancer, ovarian cancer, breast cancer or lymphoma. In addition to that, conditions including iron deficiency anemia and hemolytic anemia, inflammatory conditions (e.g., inflammatory bowel disease or rheumatoid arthritis, tuberculosis), and use of birth control pills can also result in high platelet count.
+ more