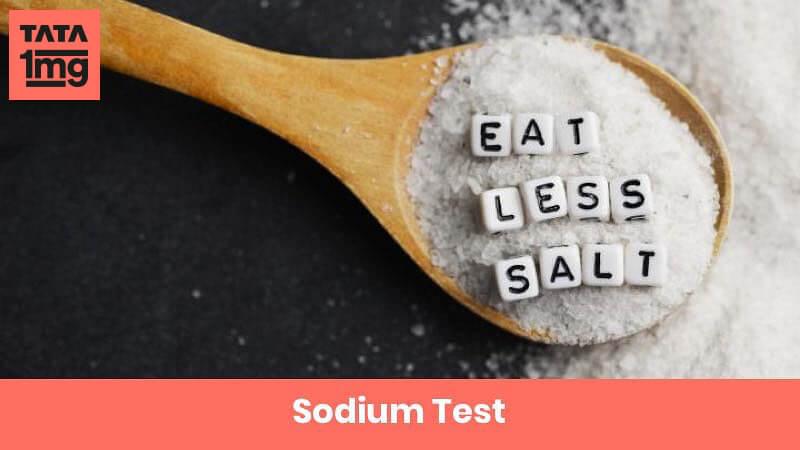 Sodium (Na+) is both an electrolyte and a mineral which is essential for metabolism, maintenance of fluid balance and functioning of nerves and muscles including transmission of impulses through the nerves to the muscles. The Sodium test is performed to measure the concentration of sodium in the blood.

The Sodium Test is performed:

·         At regular intervals to monitor the progress of condition and treatment efficacy while undergoing treatment for hypertension and diseases of the kidney, adrenal gland or liver

·         To monitor patients who are receiving diuretic therapy, intravenous fluids, or dialysis

What does Na+ Measure?

The Sodium test measures the concentration of sodium in the blood.

Sodium is an essential body electrolyte which, along with potassium, chloride, bicarbonate, etc., helps to maintain the normal fluid and pH balance in the body. It is also vital for cellular metabolism, and in the activity of nerves and muscles and transmission of impulses between them. Sodium is present in all body fluids and is found in highest concentration in the blood and extracellular fluid.

Sodium is supplied to the body principally through dietary salts (sodium chloride or NaCl), and a small portion of sodium is absorbed through other food items. The required portion is absorbed by the body and the remaining is excreted by the kidneys through urine. The body maintains a very narrow range of sodium concentration by three mechanisms:

Sodium concentration in the body is maintained within a narrow normal range between 135 mmol/L and 145 mmol/L.

Hyponatremia or low blood sodium is indicated if sodium concentration lies below the normal range.

Hypernatremia or high blood sodium is indicated if sodium concentration lies above the normal range.

Q. How is this test performed?
This test is performed on a blood sample. A syringe with a fine needle is used to withdraw blood from a blood vessel in your arm. The healthcare provider will tie an elastic band around your arm to make the blood vessels swell with blood. This makes it easier to withdraw blood. You may be asked to tightly clench your fist. Once the veins are clearly visible, the area is cleaned with an antiseptic solution and then the needle is inserted into the blood vessel to collect the sample. You will feel a tiny pinprick during the procedure. Blood sample once collected will then be sent to the laboratory.
Q. Is there any risk associated with this test?
There is no risk associated with the test. However, since this test involves a needle prick to withdraw the blood sample, in very rare cases, a patient may experience increased bleeding, hematoma formation (blood collection under the skin), bruising or infection at the site of needle prick.
Q. Is there any preparation required before the test?
Inform the doctor about the medications you may be taking. No other specific preparations are usually required before this test.
Q. What is Hypernatremia?
Hypernatremia is the condition where blood sodium levels rise higher than the normal range. This may occur due to: · Insufficient consumption of water · Increase in loss of body fluids due to diarrhea, excessive sweating, extensive burns, or diuretics · Hyperaldosteronism · Cushing's syndrome · Excess water loss from kidneys due to Diabetes Insipidus · Excessive consumption of dietary salt or sodium bicarbonate · Certain medications
Q. What is Hyponatremia?
Hyponatremia is a condition where the blood sodium levels are below the normal range. This may occur due to: · Increased loss of sodium with body fluids due to conditions such as excessive sweating, vomiting, diarrhea, diuretics, or kidney diseases · Overconsumption of water, as common during strenuous exercise · Addison’s Disease · Ketonuria · Excess fluid accumulation due to heart failure, liver cirrhosis, or kidney diseases · Improper and overproduction of antidiuretic hormone or ADH
Q. What are the symptoms of Hyponatremia?
Symptoms of Hyponatremia include: · Fatigue · Drowsiness and confusion · Restlessness and irritability · Muscular weakness, twitching, or cramps · Nausea and vomiting · Headache · Seizures · Coma
Q. What other tests can be prescribed by your doctor in case the result of Sodium test is not normal?
Others tests that may be prescribed upon appearance of an abnormal result in the blood sodium test include: · Urine Sodium Test · Electrolyte Panel Test · Kidney Function Test (KFT) · Liver Function Test · Blood Phosphate Test · Electrocardiogram (ECG)
Q. What are the symptoms of Hypernatremia?
Symptoms of Hypernatremia include: · Excessive thirst · Drying up of mucous membranes · Low urine production · Muscle twitching and cramping · Agitation and restlessness · Irrational behavior · Convulsions and seizures · Coma
+ more