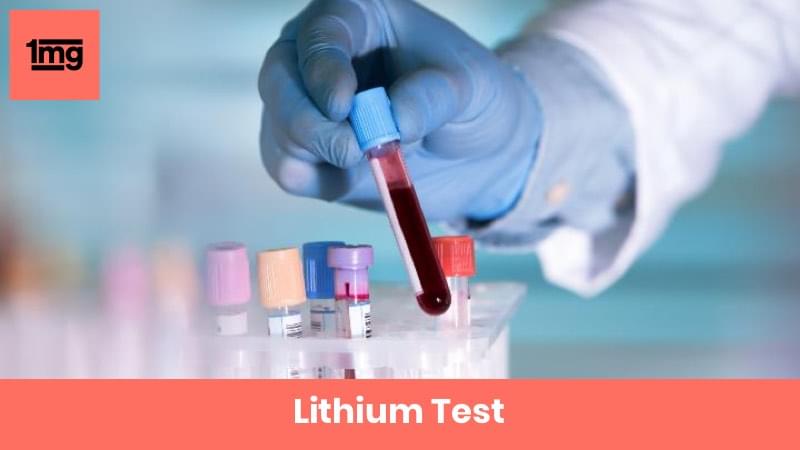 Lithium (Li+) is an element which is used as an antipsychotic drug. It treats bipolar disorder and mania, as well as some other psychological diseases like depression as an augmenting agent. The Lithium Test is performed to measure the concentration of lithium in blood.

Why is Li done?

·         To establish a therapeutic dosage for lithium

·         To check for lithium toxicity upon the appearance of symptoms

What does Li Measure?

Lithium is an alkali metal which occurs in trace amounts in the human body mainly obtained from dietary sources. Lithium compounds are used as antipsychotic drugs for the treatment of Bipolar disorder. Bipolar disease is a psychological condition where the patient goes through alternating periods of severe depression and mania. It is thus associated with sudden and unpredictable mood swings. Lithium is prescribed as a mood stabilizer to treat these sudden mood swings. It is also used as an augmenting agent for patients being treated for depression but not responding to standard medications. Lithium may also be prescribed for other psychological diseases as an augmenting agent.

Q. How is this test performed?
This test is performed on a blood sample. A syringe with a fine needle is used to withdraw blood from a blood vessel in your arm. The healthcare provider will tie an elastic band around your arm to make the blood vessels swell with blood. This makes it easier to withdraw blood. You may be asked to tightly clench your fist. Once the veins are clearly visible, the area is cleaned with an antiseptic solution and then the needle is inserted into the blood vessel to collect the sample. You will feel a tiny pinprick during the procedure. Blood sample once collected will then be sent to the laboratory.
Q. Is there any risk associated with this test?
There is no risk associated with the test. However, since this test involves a needle prick to withdraw the blood sample, in very rare cases, a patient may experience increased bleeding, hematoma formation (blood collection under the skin), bruising or infection at the site of needle prick.
Q. What are the symptoms of lithium toxicity?
Lithium toxicity may occur if the lithium concentration in your blood is higher than the therapeutic range. Symptoms of lithium toxicity include: · Fatigue and drowsiness · Gastrointestinal problems including nausea, vomiting, diarrhea · Slurring of speech · Confusion · Dizziness · Loss of coordination · Muscle weakness · Restlessness · Shivering · Seizures Very high concentration of lithium in blood may cause renal failure and even death.
Q. When can false results appear in the Lithium Test?
False results may appear in the lithium test if the test is not performed at the trough level. Trough level is the point when the concentration of lithium in blood is the lowest. Certain medications may affect the levels of lithium in blood. Loss of salt and water from the body due to excessive sweating, vomiting, etc. may affect lithium levels. Consumption of alcohol can also affect lithium concentration in blood.
Q. What other tests can be prescribed by your doctor in case the result of Lithium test is not normal?
Other tests that may be prescribed upon appearance of an abnormal result in the blood lithium test include: · Electrolyte Panel Tests · Kidney Function Tests · TSH Test
Q. What are the risks associated with lithium medication in pregnant women?
Use of lithium drugs during pregnancy can show some serious adverse effects on both the baby and the mother, including: · Risk of improper development of the heart · Risk of a stillborn child or death of the child soon after birth · Risk of lithium toxicity in the mother due to hormonal changes. Lithium may also be passed on to the baby during breastfeeding and may have negative effects on the baby.
Q. Is there any preparation required before the Lithium test?
Inform the doctor about any medications you may be taking as certain medications may affect the test results. The test is usually performed after about 12 hours from the last dose taken, at which point the concentration in blood is lowest and is said to be at trough level. No other preparations are required unless specified by your doctor.
+ more