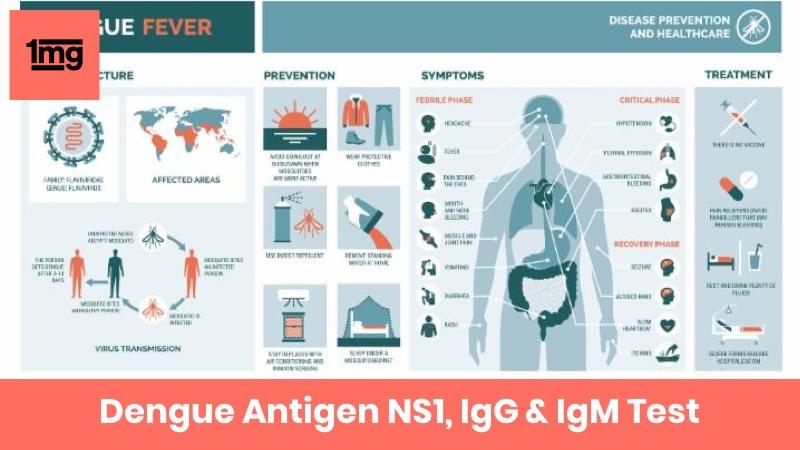 The Dengue Antigen NS1, IgG & IgM test is done to diagnose fever especially if the fever is experienced after travel to a tropical or subtropical area.

The Dengue Antigen NS1, IgG & IgM test is done in case there is high fever within 2 weeks of travel to an area where dengue outbreak is occurring or dengue fever is endemic.

The dengue antigen NS1, IgG & IgM test measures the dengue virus or antibodies which are produced in response to dengue infection. Dengue fever is a viral infection which is transmitted to humans by mosquitoes which live in tropical and subtropical climates and are responsible for carrying the virus.

According to CDC (Centers for Disease Control and Prevention), in more than 100 countries, dengue infections have been reported from parts of Africa, America, the Eastern Mediterranean, the Caribbean Western Pacific, and Southeast Asia.

According to the WHO (World Health Organization), dengue is a fast emerging infectious disease. The number of cases as well as the countries getting affected by dengue is increasing significantly. As 75% of cases do not show any symptoms, the actual number is not known but approximately the annual number of dengue infections are as high as 390 million.

Majority of the affected individuals develop no symptoms or develop only mild illness when they are exposed to one of the four serotypes of the dengue virus. In case, a patient developed symptoms, the prognosis is good for full recovery within a few weeks.

The initial symptoms which are commonly seen include sudden high fever and flu-like symptoms which appear about 4 to 7 days after being infected by a dengue mosquito. Other signs and symptoms include severe headache, especially behind the eyes, joint and muscle pain, nausea, vomiting, skin rash, and swollen glands.

In some cases, people recover from the fever on their own but some might progress to severe dengue fever which is known as Dengue hemorrhagic fever. In this case, symptoms such as nose bleeding, blood in vomiting, blood in the stool, difficulty in breathing, cold clammy skin, especially in the extremities are seen. During the next i.e. second phase, the virus attacks the vascular system (blood vessels), which causes capillaries to leak fluid into the space around the lungs, which is known as pleural effusion or into the abdominal cavity which is known as ascites. If not treated, it can worsen and become fatal to health.

Note: Recommended to do NS1 Antigen by ELISA in the first 5 days of fever. After 7-10 days of continuous fever, the recommended test is Dengue fever antibodies IgG & IgM by ELISA.

Q. What are the symptoms of Dengue fever?
Dengue fever takes around 3 to 7 days to show its effect. Sometimes the infection remains asymptomatic (without symptoms), but the majority of individuals develop classic dengue fever. Symptomatic patients become acutely febrile (feverish) and may develop severe musculoskeletal pain, headache, retro-orbital pain, and a transient macular rash, most often observed in children. Children and young adults remain at increased risk of developing dengue hemorrhagic fever and dengue shock syndrome, particularly after repeated infection with a new Dengue virus serotype.
Q. Is there any vaccine available for Dengue?
No, there is no vaccine available for Dengue.
Q. How is the blood sample taken?
The healthcare provider takes a blood sample from the arm. The site from where the blood is to be withdrawn is cleaned with a swab of rubbing alcohol. This is then followed by inserting a small needle which has a tube attached to it for collecting blood. Once the sufficient blood for analysis is withdrawn, the needle is removed. The site is then covered with a gauze pad.
Q. Is there any risk associated with the withdrawal of blood sample procedure?
As such there is no risk but in few cases, bruising, bleeding, and infection at the puncture site can be seen. In very few cases, there can be swelling of the vein after the blood is withdrawn.
Q. Is there any specific treatment available for Dengue?
No, there is no specific treatment or antiviral medicine available for Dengue. The treatment available is mainly supportive which is based on observation of hemorrhagic and circulatory abnormalities and laboratory test results (e.g., electrolytes, platelets, and hemoglobin).
Q. What is the advantage of detecting dengue NS1 antigen instead of dengue antibodies?
Detection of Dengue NS1 antigen helps in the diagnosis of current infection within the first week of illness (during the fever phase). Detection of IgM antibody, however, indicates possible current infection or recent infection (can be positive if the infection had occurred within the past 2 to 3 months). For medical management of acute fever, it is important to diagnose current infection which is done by Dengue-NS1. It has been observed that detecting Dengue NS1 is way reliable and takes less time than IgM, which takes around 6 to 10 to show results.
Q. What are the clinical types of Dengue fever?
The types of Dengue fever include Dengue fever or break-bone fever (chikungunya) with no serious complications, Dengue hemorrhagic fever with bleeding, low platelet, and fluid loss (plasma leakage) and Dengue shock syndrome with low blood pressure.
+ more