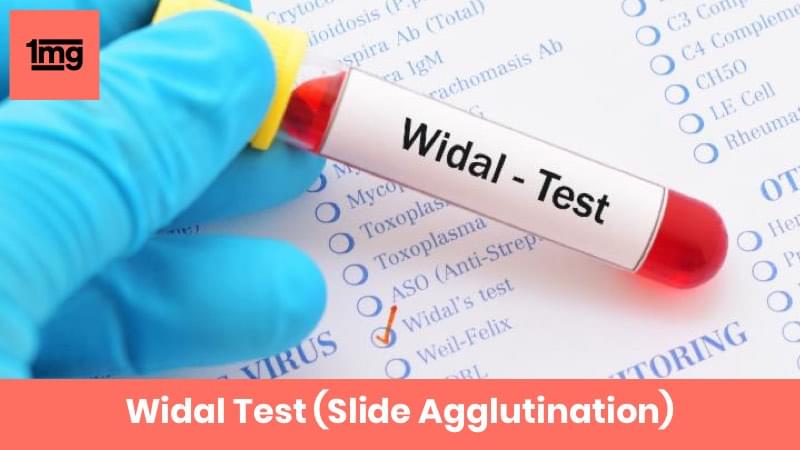 What is Widal Test (Slide Agglutination)?

The Widal test measures the titres of antibody against the bacteria which cause Enteric fever.

Typhoid and paratyphoid fever are generally acquired when you consume food or water, contaminated by feces of an acutely infected or convalescent person (recovering from disease) or a chronic, asymptomatic carrier. The incubation period (the time interval between exposure to an infection and the appearance of the first symptoms) of Enteric fever is 6-30 days.

Typhoid fever has a gradual onset. In the beginning, there is an increasing feeling of fatigue along with a fever which increases with every passing day. By the fourth or fifth day the fever may vary from low-grade to as high as 102°F–104°F (38°C–40°C). Known as the Stepladder fever pattern, this was once the hallmark symptom of Typhoid but is now witnessed in very few cases The patient may suffer from a headache, weakness, and loss of appetite. Abdominal pain, diarrhea, or constipation are common but not threatening. A transient rash of rose-colored spots can occasionally be seen on the trunk (Rose spots). The disease can last for a month, if untreated. Early diagnosis and treatment is important as life-threatening complications of typhoid fever generally occur after 2–3 weeks of illness and may include intestinal bleeding or perforation.

Widal test should only be performed after the first week. The reason being the antibody against “O” and “H” antigens of Salmonella start appearing in serum at the end of the first week of fever. It is preferable to test two blood samples at an interval of 7 to 10 days to demonstrate rising antibody titres.

If the antibody against Salmonella is present in the patient’s serum, it will react with the respective antigen in the reagent and give visible agglutination (clumping) on the test slide.

The highest dilution of the patient’s serum sample that gives a visible agglutination with the Widal test antigen suspensions is the antibody titre.

The serum sample which shows the titre of 1:80 or more for O agglutination and 1:160 or more for H agglutination indicates active infection. A  rise in titres (4-fold or more) in the two blood samples taken 10 days apart confirms the diagnosis. Please note that different labs may have different reference values for the interpretation of the Widal test.

Q. How is this test performed?
This test is performed on a blood sample. A syringe with a fine needle is used to withdraw blood from a blood vessel in your arm. The healthcare provider will tie an elastic band around your arm to make the blood vessels swell with blood. This makes it easier to withdraw blood. You may be asked to tightly clench your fist. Once the veins are clearly visible, the area is cleaned with an antiseptic solution and then the needle is inserted into the blood vessel to collect the sample. You will feel a tiny pinprick during the procedure. Blood sample once collected will then be sent to the laboratory.
Q. Is there any risk associated with this test?
There is no risk associated with the test. However, since this test involves a needle prick to withdraw the blood sample, in very rare cases, a patient may experience increased bleeding, hematoma formation (blood collection under the skin), bruising or infection at the site of needle prick.
Q. Is there any preparation required before the test?
Inform the doctor about the medications you may be taking. No other specific preparations are usually required before this test.
Q. What are the different methods for performing Widal test?
Widal test can be performed by the following two different methods: 1. Slide agglutination Widal test Qualitative Slide Test Quantitative Slide Test 2. Tube agglutination Widal test Tube agglutination is the recommended method as it has more accuracy. However, Slide agglutination is preferred by some as it gives the rapid result. Tube agglutination method requires approximately 18 hours for test completion.
Q. What are the limitations of Widal test?
The limitations of Widal test are: Previous typhoid vaccination may result in increased antibody titres in the non-infected persons False positive Widal test can occur in patients with non-enteric Salmonella infection, for example Typhus, Immunological disorders, chronic liver disease, Malaria and cryptococcal meningitis Prior use of antibiotics can affect antibody response giving a low titre in the Widal test even in the presence of bacteriologically confirmed typhoid fever The Widal agglutination titre varies with the geographic location based on the prevalence of Salmonella infection in that area Past infection with serotype Typhi or another nontyphoidal Salmonella serotype also results in false positive Widal test
Q. How can you prevent typhoid fever?
Avoiding contaminated foods and drinks can help to prevent typhoid fever. Along with that, proper vaccination against typhoid fever can also keep a check on developing any possible case of infection.
Q. What are the other tests to diagnose Enteric fever?
The other tests which are used to diagnose Enteric fever include Blood culture test, Widal test, Stool culture test, and Urine culture test. Among these, blood culture is the most commonly recommended method for diagnosing Enteric fever and is performed during the first week of fever. If in case other test results come inconclusive then bone marrow samples can be used to diagnose any infections.
+ more