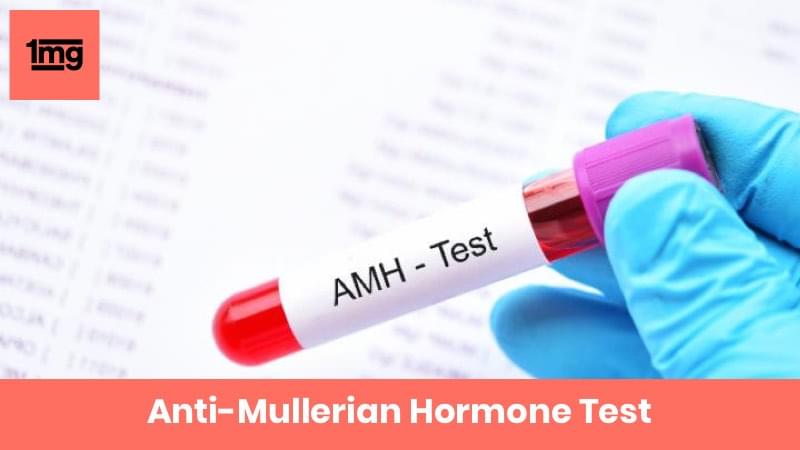 Anti Mullerian Hormone (AMH), also known as the Müllerian-inhibiting hormone (MIH) is a naturally produced hormone by the sex organs (testes in males and ovaries in females) that determine development and functioning of the reproductive organs. AMH levels may also indicate certain health conditions. The AMH Test measures the levels of Anti Mullerian Hormone or AMH in blood.

Why is AMH done?

The AMH Test is performed:

·         To help in the diagnosis of Polycystic Ovarian Syndrome (PCOS)

·         To monitor treatment efficacy for some ovarian cancers

What does AMH Measure?

The AMH Test measures the levels of Anti Mullerian Hormone or AMH in blood.

Anti Mullerian Hormone or AMH is produced primarily by the testicles in males and the ovaries in females. AMH levels in blood determine and regulate a number of activities of the human reproductive system.

After birth, AMH levels remain high in males till puberty, after which they fall slowly and taper off with time. AMH levels in females remain low after birth till puberty. During puberty, AMH is secreted by the ovaries resulting in a sharp increase in its levels. The levels slowly keep falling throughout the female reproductive period and become very low to undetectable after menopause. AMH maintains a balance of the two important female reproductive hormones: Luteinizing Hormone (LH) and Follicle Stimulating Hormone (FSH), which regulate the maturation and release of eggs from the ovaries along with other hormones. Hence, AMH levels during the female reproductive period serve as an indication of the ovarian reserve (number of remaining eggs that can mature fully and be released for reproduction), and hence fertility. It is also an indicator of the onset of menopause, especially in older women.
AMH can also be produced by ovarian cysts formed during PCOS, as well as by some types of ovarian tumors.

Results in the normal range indicate high fertility and ovarian reserve and a high chance of IVF success.

Results in the very low range indicate a very low ovarian reserve and low chances of reproductive success with IVF.

Q. How is this test performed?
This test is performed on a blood sample. A syringe with a fine needle is used to withdraw blood from a blood vessel in your arm. The healthcare provider will tie an elastic band around your arm to make the blood vessels swell with blood. This makes it easier to withdraw blood. You may be asked to tightly clench your fist. Once the veins are clearly visible, the area is cleaned with an antiseptic solution and then the needle is inserted into the blood vessel to collect the sample. You will feel a tiny pinprick during the procedure. Blood sample once collected will then be sent to the laboratory.
Q. Is there any risk associated with this test?
There is no risk associated with the test. However, since this test involves a needle prick to withdraw the blood sample, in very rare cases, a patient may experience increased bleeding, hematoma formation (blood collection under the skin), bruising or infection at the site of needle prick.
Q. Is there any preparation required before the AMH test?
Since AMH levels in blood remain fairly consistent and do not vary like other hormones through the menstrual cycle, this test may be performed any time. However, birth control pills may affect the AMH levels, hence if you are on birth control pills, it is advisable to discontinue them about 1 to 2 months before the test is performed. Inform the doctor of any medications you may be taking. No other specific preparations are usually required before the AMH Test.
Q. What factors can affect the AMH test results?
The AMH levels in blood can be affected by a number of factors including: · Age of the patient · Heavy smoking · Stress · Hormonal imbalance · Illness · Chronic exposure to environmental smoke · Chemotherapy drugs
Q. What additional tests can be prescribed by your doctor in case of abnormal AMH test result?
Additional tests that may be prescribed in case of abnormal AMH test result are: · Androgen (Testosterone) Test · Estrogen and Progesterone Tests · FSH and LH Tests · Inhibin B Test for fertility · Inhibin Test (A and B) for tumour workup
Q. What is IVF?
IVF or In Vitro Fertilisation is a type of Assisted Reproductive Technology (ART) where eggs retrieved from the female and sperms retrieved from the male are made to fuse and undergo fertilization in a laboratory, instead of the female body. The zygote formed is incubated for some time and is then implanted into the female uterus for further development and delivery. It is a commonly used procedure to overcome the inability to conceive and complete pregnancy naturally.
Q. What is PCOS?
Polycystic Ovarian Syndrome or PCOS refers to a group of medical conditions in females caused due to high levels of male hormones or androgens. It is usually characterized by the presence of multiple cysts on the ovaries in affected females. Symptoms of PCOS include: · Irregular or no menstruation · Abnormal bleeding during periods · Excessive male pattern body hair on face, chest, and buttocks (hirsutism) · Thinning of hair and hair loss from head · Patches of skin turning velvety black (acanthosis nigricans) · Acne · Loss of fertility The condition is usually associated with obesity and diabetes and may give rise to severe complications if not managed, including high blood cholesterol causing cardiovascular disorders, sleep apnea, infertility, depression, endometrial cancer, etc.
+ more