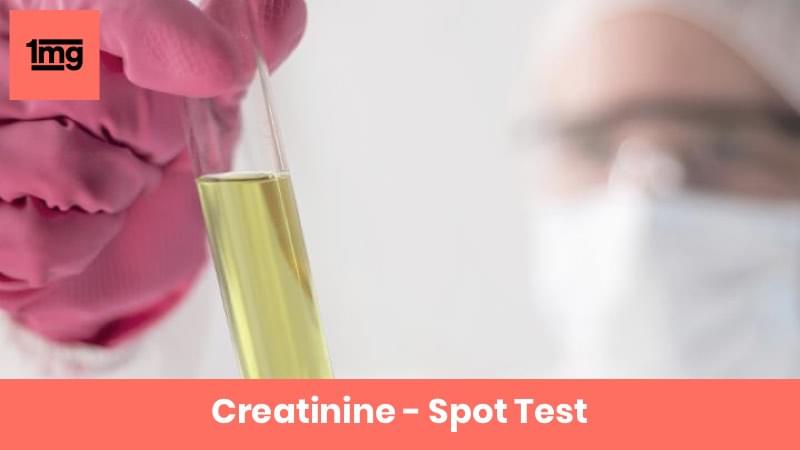 You need to provide
Urine
This test is for
Male, Female
Test Preparation

What is Creatinine - Spot?

Creatinine spot test, also known as urine creatinine test. It measures the amount of creatinine in the urine. This test is advised to evaluate the health of your kidneys, to help diagnose kidney diseases, and to monitor treatment for kidney diseases. Creatinine is a waste product which is produced by muscles as a result of breakdown of the compound known as creatine.

Why is Creatinine - Spot done?

The creatinine - spot test is done:

What does Creatinine - Spot Measure?

The body produces creatine and creatinine at a relatively same rate. Since kidneys filter most of the creatinine from the blood and release it into the urine, the blood levels can be used as an indicator to know how well the kidneys are functioning. The amount of creatinine produced depends on the muscle mass and general physique (size) of an individual. That is why levels of creatinine are higher in men as compared to women and children.

*Reference range may vary from lab to lab.

Low levels of creatinine do not have any significance. The cause of low levels can be due to decreased muscle mass.

Q. Is there any effect of exercise on creatinine levels?
No, the creatinine levels are not affected by moderate exercise. However, the levels may increase if the muscle mass is increased.
Q. What are the conditions in which high levels of creatinine are seen?
High levels of creatinine are seen in cases of kidney infections, damage to blood vessels of the kidneys, swelling of blood vessels of the kidneys, and death of cells in small tubes of kidneys. These increased levels can also be the result of prostate disease, kidney disease, obstruction in the urinary tract, reduced blood flow to the kidneys, and muscle injury. Moreover, some medicines can also cause levels of creatinine to rise.
Q. What are the conditions in which low levels of creatinine are seen?
Low levels of creatinine can be seen in cases of pregnancy.
Q. How is the urine sample collected?
As the test is performed on the urine sample. It is essential to prevent contamination of the sample with microorganisms naturally present on the skin. During urine collection, women should spread the labia (outer lips of the vagina) while men should retract or pull back the foreskin (fold of skin covering the glans or head of the penis). Start urinating normally and let some urine flow before collecting 20 to 30 ml urine the sterilized container available from the lab or any pharmacy. After collecting the sample, finish urinating into the toilet or urinal. This process is called midstream clean catch method. The urine sample may also be collected using a catheter inserted through the urethra directly into the urinary bladder. Sample collected through a catheter usually has no contamination.
+ more