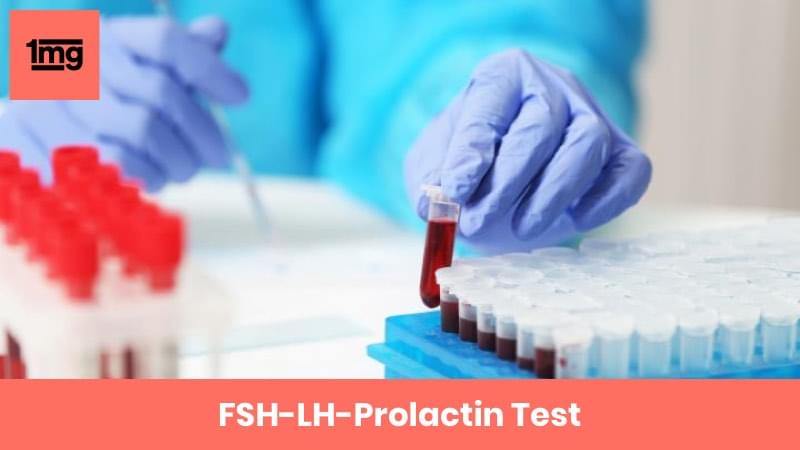 FSH, LH, and Prolactin are three key reproductive hormones which play an important role in reproduction. These tests are done to analyze any hormonal changes which may cause infertility.

Follicle-stimulating hormone (FSH): This hormone is associated with reproduction and the development of eggs in women and sperm in men. FSH is produced by the pituitary gland, and its production is controlled by a feedback system. This feedback system involving the hypothalamus in the brain, the pituitary gland, and the hormones produced by the ovaries or testicles. The Gonadotropin-releasing hormone (GnRH) from the hypothalamus stimulates the pituitary gland to release FSH and luteinizing hormone (LH; another closely-related hormone also involved in reproduction). FSH affects the growth and maturation of egg follicles in the ovaries during the follicular phase of the menstrual cycle. The menstrual cycle is divided into follicular and luteal phases, each phase lasting for 14 days. During the follicular phase, FSH triggers the production of estradiol by the follicle, and the two hormones work together in the further development of the egg follicle. Near the end of the follicular phase, the production of FSH and luteinizing hormone increases. The release of the egg from the ovary (ovulation) occurs shortly after this increased production of hormones. The hormone inhibin as well as estradiol and progesterone help in controlling the amount of FSH released by the pituitary gland. FSH also helps the ovary to respond to LH. At menopause, ovarian function decreases and eventually stops which results in increased levels of FSH and LH.

In males, the role of FSH is to stimulate the testicles to produce mature sperms and also to promote the production of androgen binding proteins. FSH levels are relatively constant in men after puberty than in women.

In infants and children, FSH levels rise shortly after birth and then fall to very low levels. Generally, in boys, these levels decrease by 6 months and in girls, they take about 1-2 years. These concentrations rise again before the beginning of puberty and the development of secondary sexual characteristics.

Disorders affecting the hypothalamus, pituitary, and/or the ovaries or testicles can cause abnormal production of FSH (too much or too little). This, as a result, can cause conditions such as infertility, abnormal menstrual cycles, or early (precocious) or delayed sexual maturation (puberty).

Luteinizing hormone (LH): This hormone is associated with reproduction and ovulation. In females, it stimulates the release of an egg from the ovary. However, in males, testosterone production is dependent on LH. This test helps in measuring the amount of LH present in the blood.

In premenopausal women, LH stimulates ovulation and the production of other hormones, namely, estradiol and progesterone. The menstrual cycle is divided into 2 phases, follicular and luteal phases, each of which lasts for about 14 days. Near the end of the follicular phase, there is a mid-cycle increase in follicle-stimulating hormone (FSH) and LH. This triggers ovulation. During the luteal phase, LH secretion stimulates the corpus luteum to start producing progesterone. At this point, the levels of FSH and LH get reduced, while progesterone and estradiol concentrations rise. If the egg is not fertilized, then the levels of these hormones fall after several days followed by the beginning of the next menstrual cycle. With the onset of menopause ovarian function reduces and eventually discontinues, which results in increased levels of FSH and LH.

In men, LH stimulates Leydig cells in the testicles to produce testosterone. However, the levels of LH remain relatively constant in men after puberty. Due to high levels of testosterone, the pituitary gland and the hypothalamus receives negative feedback which in turn decreases the secretion of LH hormone.

In infants and children, LH levels rise shortly after birth and then fall to very low levels, which is about 6 months in boys and 1-2 years in girls. At about 6-8 years of age, levels again rise before the beginning of puberty and secondary sexual characteristics development.

Prolactin hormone: It is produced by the pituitary gland which is located at the base of the brain. The secretion of this hormone is controlled by the hypothalamus. The primary function of this hormone is to help in the production of milk after childbirth (lactation). Prolactin levels are usually high during pregnancy and after childbirth. During pregnancy, this hormone along with other hormones like estrogen and progesterone stimulates the breasts for milk production. After the childbirth, it helps to maintain breast milk production. Suckling of the breast by the baby is important for the release of prolactin hormone. If a woman stops breastfeeding, the level of prolactin hormone will return to normal.

Abnormally high levels of prolactin are seen in certain disease conditions like prolactinoma (non-cancerous tumor of the pituitary gland) in men and women. Prolactinomas are generally benign (non-cancerous) in nature and are seen more commonly in women. If the tumor is quite large, it can put pressure on the optic nerve and can cause headaches and visual disturbances.

High levels of prolactin are also seen in patients with diseases of the hypothalamus (located in the brain), other pituitary gland disorders and tumors, kidney disease, liver disease, hypothyroidism, polycystic ovary syndrome (PCOD) and conditions like anorexia nervosa (eating disorder).

Low levels of prolactin are seen in patients with pseudohypoparathyroidism, patients taking bromocriptine and in conditions of pituitary deficiency like necrosis or infarction of the pituitary gland.

The following values are considered to be normal, LH blood levels measured in international units per liter (IU/L):

The following values are considered to be normal, prolactin blood levels measured in international units per liter (ng/mL):